Dreams of Grief, Dreams of Healing 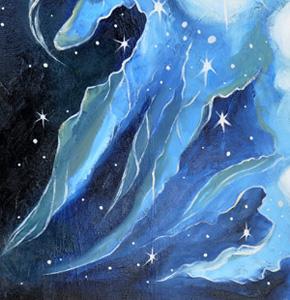 “And like seeds dreaming beneath the snow your heart dreams of spring.

Trust the dreams, for in them is hidden the gate to eternity.”  Kahlil Gibran

So, my mom died recently. It has been a sad period of time, up and down, days of being “fine” interspersed with days with tears. The whole process however, has been punctuated with waking and sleeping dreams that have brought me comfort, clarity, and no small bit of awe and trepidation.

When a loved one dies it is often the case that that the bereaved report various dreams and/or visits from the departed. Sometimes these are incredibly comforting. Sometimes they are frightening. Sometimes they contain unfinished business. These dreams come in the service of peering between the veils that separate the worlds for connection, information, or a way to make peace that was not available during life.

I thought to share some of my process with you, to illuminate some of the ways in which waking and sleeping dreams can come through when we stand on the edges of life, and then when we mourn those who have passed over.

My mom got sick suddenly: the day before she went to the hospital she was teaching her “Yoga for Seniors” class. After a week of hospitalization, she was discharged to a rehab facility. I got down to visit her; and spent the weekend giving her reiki and massages and buying her some favorite foods (like vanilla yogurt, health conscious to the end!) that the rehab didn’t provide. When I left, she seemed tired but stable. But as I drove back to the airport, I had a waking dream: I heard a voice, clear as day, saying, “Mom has died”. I so didn’t want that to be true. I argued with myself, saying, “That’s just your fear”; and while that was also true, the voice in no uncertain terms repeated itself again. Two days later I got a call from the hospital saying that she was in multiple organ failure, and asking if she had a living will. We were lucky that my mom had been both organized and very clear: My siblings and I all knew that she definitely did not want any extreme measures. She died while I was on the phone with the doctor. So while I was not “there”, I was there.

About an hour or two later, I had another waking dream. This time I saw a swirl of smoke and mist rise up and spiral out of her body straight up to join my stepfather, her beloved Bud, who had died eight years before. I saw and felt their embrace- it was clear he had been waiting for her. Some souls hang out in the Bardo (that place between worlds where souls can rest and regroup while they get oriented to having released their bodies before moving on to the next stage.) No waiting room for my mom though – she had a concierge already waiting to welcome and orient her. I felt a great peace come over me with this.

I didn’t expect to have her visit in my dreams for a while, because concierge or no, this was still a big journey. About 3 weeks later, I had my first night dream. Mom visited me, and in the dream we were in a house and there seemed to be some confusion about whose bedroom was whose. I thanked her for her visit, and told her that it was perfectly ok for her to get really settled first before visiting again. I had a sense that she appreciated this, and that next time she visits, she will be more settled in her new place. When I had my next dream about being lost and disoriented, she was not in it. This was my journey, my work to come to terms with this new phase of my life.

Jeremy Taylor tells us that all dreams, even nightmares, come bearing gifts. They are not always the gifts we are seeking, so we have to find a way to integrate them into our lives when they show up. It would seem that this is one of my unasked for gifts: a dream that can presage a death, and then more comforting gift of being able to entertain visits afterwards. A few days before my stepdad died (he had had a stroke), I had a dream of an owl. I knew that owls were often harbingers of death in shamanic tradition, but I remember telling myself that there could be many other associations as well. As with my mom, I knew deep down that my self -talk was just wishful thinking. He died a few days later. I then had a dream of a small wooden hut overlooking a frozen river. There was a guard in the house. My dream circle helped me to know that this was Charon, boatman of the River Styx; over which he ferried the souls of the dead in Greek myth. As I watched, the sun came out and the ice began to break up. My grief slowly melted as time passed, and Bud has come to visit me regularly and even on request since that time. I am immensely comforted at this time of loss to know that I can expect to continue my relationship with both of them, and will no doubt hear my mom telling me to take my vitamins, to live fully, and to always take a direct flight whenever possible in the future.

With blessings and sweet dreams,

Categories: dream symbols dreams as a resource people in our dreams spiritual dreaming Uncategorized visiting our departed thru dreams