A Minyan of Trees: Encountering the Dream in the Woods 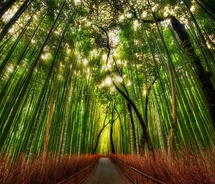 There are dreams, and there are dreams.  We can traverse the thresholds between worlds by paying  attention to synchronicities in our lives (see blog of 7/28/12 for more on synchronicities); or this liminal space can also show up unasked.  This post is about the second kind- we were gifted in the woods on this one. The Druids knew this: the spirits of the woods and of nature were literally housed in the trees themselves in the forms of Nymphs and Dryads and other “tree people”.  Ritual can sometimes bring down this place of eyes-open wonder.

Carol Dearborn says about in-between spaces: “It appears that there is a “place” …in the intersection of the perceptual/cognitive process (a “place” or type of brain-wave) between waking and sleep where the metaphysical intersects the physical.  This intersection…becomes a kind of portal through which energy can be conveyed…Opening this portal requires a receptive and reverential state of being, like falling in love.”  (www.caroldearborn.com, the spirit of place).  Jung wrote of this too, calling this space between sleep and waking the hypnopompic or hypnogogic zones.

One of the words for God in Hebrew is “Makom”, which translates most simply as “Place”, but contains both a temporal  (time based) as well as physical implication.  It appears in the story of Jacob, when he has his famous dream of the ladder with angels going up and down it.  When he awakes from this dream, he says, “God was in this place (Makom), and I, I did not know.”   The word “Makom” also appears in the creation story, when Moses encountered the burning bush, and at Mt. Sinai  (among others).  When we are at “Makom” we are for a moment outside of the rules of time and space; and for that moment on holy ground.

“Minyan” is the Hebrew word for the group of ten people that are needed to be able to recite Kaddish; the traditional prayer for the dead.  In Jewish tradition, community is a big part of the healing process; I learned that the original requisite of gathering a minimum of ten was in order to compel the mourner to gather in community at a time of grief rather than to isolate him/herself. Traditionally only men were counted; in most modern practice women are too.  We found that acknowledging our animal, vegetable, and mineral brethren as part of a minyan worked as well.

So, I was walking in the woods with my friend Sara, about a month after her beloved grandfather had died.  She had been to services earlier that day, and had declined an offer to say Kaddish, partially because it is traditionally said only for parents, spouses, or children. I asked her if she regretted passing up the opportunity her community had offered.  Without hesitation, she said, “Yes – and I rarely regret anything!” We walked a little more, and then I asked if she wanted to say Kaddish right now; for since we were breaking one rule (not for a parent, spouse or child) and reconfiguring the ritual we might as well break with the rule of ten people.  Sara agreed and said “Yes- let’s find a tree to say it near”.

So we bush-wacked through a clump of weeds, and snuggled up to a beautiful three-trunked tree: one of those triple goddess trees.  We decided that “She (the Tree) can be part of our minyan” along with Bodisavta the dog (and yes, that is her actual doggy name).  We got into the spirit of minyan, and began counting: ” Me, you, Bodi, the triple tree counts as three, that’s six, the earth, the sky, the bush, and the rish-roosh sound of the wind-spirit in the trees- there’s ten.”  We had our minyan.  Ten Beings.  We said Kaddish.

The dreaming spirits of the Place came in, and we crossed the threshold in the woods.  Her grandfather showed up, as did my dad who had died 6 years, and we had a lovely gathering with them in this in-between Place.

Perhaps the ancient Druidic spirits of the trees also joined us in the minyan.  As e.e.cummings says: “…thank you God for this most amazing day,

for the leaping greenly Spirit of the trees…”

I am grateful for this type of dreaming as well.

Next time I’ll talk more about encountering our relatives in dreams- dead or alive, for better or worse, and how do we know if we have had a “visit” from the other side, or a dream encounter of a different kind.  Stay tuned…

Categories: ancient and modern dream practices dreams and kabbalah dreams as a resource mystical level of dreams Synchronicity visiting our departed thru dreams

2 Responses to A Minyan of Trees: Encountering the Dream in the Woods